Ramblings, thoughts, facts and opinions about political things - starting point council tenant participation with my land-lord Camden council and council tenant reps plus other housing issues, and whatever.

When the council property I live in was converted (in the late 1970's) from a single house into 3 separate flats, building regulations in London where the responsibility of the local council in the form of Byelaws [Local Acts]

Statutory Instruments [secondary legislation] such as the Building Regulations 1976 HERE, did not apply to London as elsewhere in the country until the Building Act 1984.

Some information about Local Acts HERE


The Building Act 1984 replaced the previous system of local bye-laws with nationally applicable regulations made by the Secretary of State for the Environment.

The Building Regulations 1985 (SI 1985/1065) contained for the first time a requirement that walls and floors which separate one dwelling from another should resist the transmission of airborne and impact sound: see Part E of Schedule 1 to the Regulations.

Similar provisions are now contained in the Building Regulations 1991 (SI 1991/2768). But the regulations apply only to buildings erected or converted after they came into force."


" Byelaws are local laws made by a local council under an enabling power contained in a public general act or a local act requiring something to be done – or not done – in a specified area. They are accompanied by some sanction or penalty for their non-observance."

If validly made, byelaws have the force of law within the areas to which they apply. Generally byelaws are overseen by the relevant government department or confirming authority who has policy responsibility for the subject matter." HERE 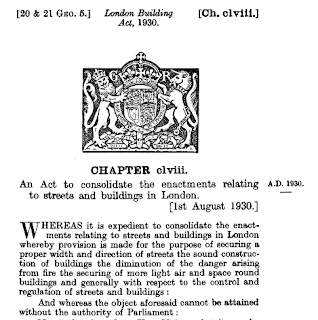 2.17 approval under the London Building Acts and the associated bye laws was the responsibility of the Greater London Council [GLC]. 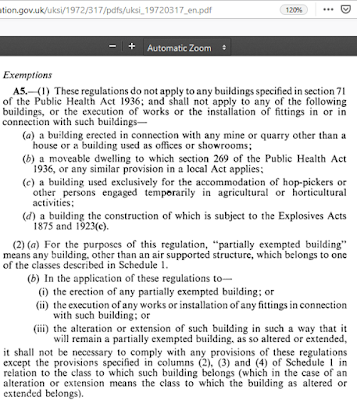 The below Act exempted some buildings from building by-laws. 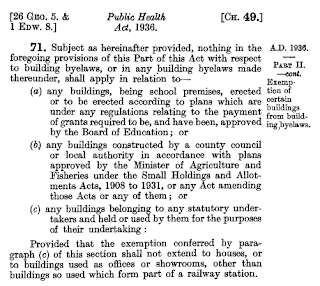 NB I have tried to track down the relevant local London by-laws that where supposed to be in place but no-one seems to have them: locally, [London] county hall [Mayor of London ] national archives.
at June 13, 2021

DHAMMAPADA Verses from The Pitaka

Love yourself and be awake -
Today, tomorrow, always.

First establish yourself in the way,
Then teach others,
And so defeat sorrow.

To strengthen the crooked
You must first do a harder thing -
Straighten yourself.

You are your only master.
Who else?
Subdue yourself,
And discover your master.

The Good the Bad, the Ugly